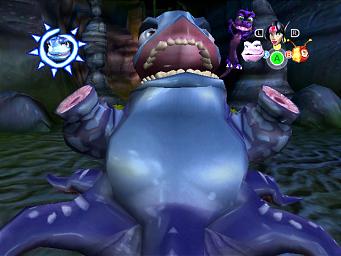 Kameo
All Images (7) »
The partnership between Rare and Microsoft was bound to inspire some classic creations. The first trio of Rare Xbox exclusives look like they might just meet these sky-high expectations. Check them out:

GRABBED BY THE GHOULIES
A cel-shaded comedy beat 'em up action adventure with the classic 'rescue the gal' storyline. Nice! You play a young chap named Cooper braving a jaunt through a haunted mansion riddled with monsters and booby-traps. There's plenty of variety amongst these foul creatures: spectres, mummies, vampires, undead skeletons and poltergeists are all poised to thwart the plucky young adventurer. Despite the kiddie visuals, Rare is confident that players will be spooked by this hideous house of horrors.


CONKER: LIVE AND UNCUT
We haven't seen anything of Conker the Squirrel since his 'Bad Fur Day' on the N64. He still has a filthy mouth and a short temper, and his move to the Xbox has now given him further opportunity for vermin-based malevolence. Dispensing with the pacifying platforming formula, Live and Uncut will actually be a taste-free team-based shooter!

There's a huge variety of scenario-based gameplay modes, pitting you (and up to 15 other players) against assorted adversaries. Robbing banks, fighting off aliens, swearing profusely - its all there in exemplary form. They've even gone Sega-stylee and bundled in a spruced up version of the original N64 game.


KAMEO: ELEMENTS OF POWER
Another action adventure, this time set in a fantasy world of fiendish beasts and sorcerers. It'll have you morphing into myriad monsters whilst attempting to rescue the 'Elemental Ancestors' from the 'Dark Troll King'. Expect Kameo to make an appearance early sometime in 2004.