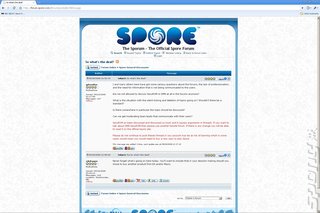 Shortly after running this story we were phoned by a very helpful EA spokesperson who answered the key question: "Did a Forum moderator threaten a customer with the loss of their game". The answer, was, "Yes, it was a moderator. But, as we have stated, this was a miscommunication. You will absolutely not lose your game for posting about DRM."

Yesterday, a SPOnG reader, Jimrad, sent us a heads-up on Electronic Arts/Maxis apparently threatening to deactivate Spore customer's game if that customer continued to debate the SecuROM DRM in the game.

You can see a screengrab of the relevant thread to the right of this story. On the surface, a moderator on the Spore forum locked a thread entitled, "So what's the deal?" with the following warning to poster, jpfrostfox:

"SecuROM as been discussed and discussed so much and it causes arguments in threads. If you want to talk about DRM SecuROM then please use another fansite forum. If there is any change you will be able to read it on the official Spore site.

Please do not continue to post theses thread or you account may be at risk of banning which in some cases would mean you would need to buy a new copy to play Spore."

Rather than run headlong into a shock/horror headline, we did some background work first. This entailed contacting Electronic Arts yesterday afternoon to find out whether the wording and the threatened action did in fact come from an official source.

By midday today, we've not had a response to this one.

We also carried out a little forensic work on previously locked threads. This lead us to believe that, as no other threads had been locked off with legally dubious threats marked up in HTML font tags, it was possible that EA hadn't slaughtered the remaining good will for Spore. Instead, the threat could have been spoofed.

Later in the day, the thread was re-opened for what appears to be an official comment from a Maxis developer, Carl aka maxislucky, who said, "We are happy to support healthy exchanges on the forums. And people will only get banned for breaking the rules.

Discussing DRM is not breaking the rules - and as long as it is a civil conversation, it's cool with us.

There's a thread about online accounts at: http://forum.spore.com/jforum/posts/list/2897.page

Please feel free to discuss DRM there - we'd like to keep this to a few posts so that people who are here to talk about the game don't have to sort through all the DRM posts. This thread will be locked - so feel free to post on the other thread."

That thread, however, did not cover the ire of the community. Another was started with the title, "So wait, not only do we have to ask permission to reinstall the game...". This contains no small amount of bitterness regarding the original "So what's the deal post?" but also elicited this response from a moderator, sporemasterladym:

"You are not going to lose your game for posting a comment.

"Again, there is no point in grabbing the torches and assuming the worst. As I said before, you are allowed to discuss things as long as it's done in a civil manner.

Believe it or not, EA does listen to your concerns and they are working to make things run smoother."

This was met with a response from the original poster, jpfrostfox, which explained the original post, "Now, my whole reason for that post was because at that time there were posts... and I mean good posts full of very intelligent discussion, critique and complaints that were being thrown out left and right without any reason given, any notice, or any guidelines or statements being made that the subject was taboo. Many of them just disappeared, and every single one of the others was locked - any further posts were threatened (as seen) leading to confusion over whether the topic was outright barred or what. The digital restriction management was just the most widely discussed and visible of those topics."

The mod', sporemasterladym, responds, "They are looking into this. You are allowed to discuss DRM and you will not lose your game."

All of this - and especially the last quote - does not answer the central question, however. And this regards the original, red-text, apparently official quote about forum bans resulting in "the need to buy a new copy to play Spore" and the nature of official forums. Did that thread locking post come from an official? Why are 'they looking into this'? Surely there must be a simple and quick way for to track comments using the Phbb system that the Spore forum is based on?

Actually, we had a quick look over the system's out-of-the-box options and came up with, "Moderator Log

"This logs records the actions performed by moderators of your board. Whenever a topic is moved or locked it will be recorded here, allowing you to see who carried out a particular action."

So, not that hard to find out who did what then? SEE THE UPDATE.
Companies: Electronic Arts
Games: SPORE