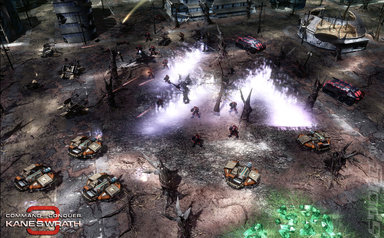 More EA's Wrath than Kane's...
A moderator on the Command & Conquer forum - run by Electronic Arts - has published the following message regarding updates the to site and specifically what happens if you are banned from an EA forum. It makes startling reading:

Referring to the new C&C site in terms of bans, the mod, called EA Apoc (C&C) states, "Well, its (sic) actually going to be a bit nastier for those who get banned.

"Your forum account will be directly tied to your Master EA Account, so if we ban you on the forums, you would be banned from the game as well since the login process is the same. And you'd actually be banned from your other EA games as well since its all tied to your account. So if you have SPORE and Red Alert 3 and you get yourself banned on our forums or in-game, well, your SPORE account would be banned to. It's all one in the same, so I strongly reccommend (sic) people play nice and act mature.

"All in all, we expect people to come on here and abide by our ToS. We hate banning people, it makes our lives a lot tougher, but its what we have to do.

"Those banned will stay banned, but like most other internet services, its not that hard to create a new fake e-mail account. However, its a lot harder to get a new serial key =)"

(Our bolds. You can read the full thread here)

This comes less than a month after the EA declared that users would not find their games online component withdrawn on being banned from a forum. Specifically, a Spore forum mod called sporemasterladym posted, "You are not going to lose your game for posting a comment.

"Again, there is no point in grabbing the torches and assuming the worst. As I said before, you are allowed to discuss things as long as it's done in a civil manner.

Believe it or not, EA does listen to your concerns and they are working to make things run smoother".

We have contacted EA to get official comment on whether this latest total ban threat is actual policy or another miscommunication.
Companies: Electronic Arts
Games: Command and Conquer 3: Kane's Wrath SPORE

C'mon, SPOnG, commit to your pedantry!